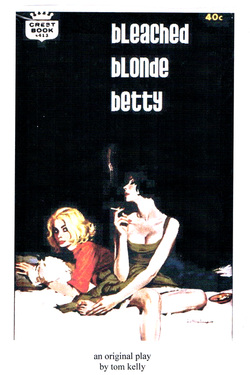 Betty is a writer rapidly going nowhere but to work as a waitress.  Betty likes Sammy, the security guard at the New Modern Museum of Art.  Mystic is Betty’s stripper roommate.  She introduces Betty to her new boyfriend, Bobby.  Betty LOVES Bobby.  Bobby is suddenly interested in Betty.  He suggests to Betty a way for them to realize the life they want:  use Sammy to steal a painting from the Museum.  Along the way they will have to battle the Jersey Mob, a serial killer, an ex-con art thief, and the general chaos of their own conscience.  BLEACHED BLONDE BETTY asks the one major question in life:  what would you do for love?

Tickets are 18 and are now available online at workshoptheater.org. Tickets may also be purchased in person at the theater 30 minutes prior to performance.